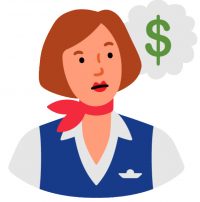 The majority of the flying public may not be aware that flight attendants aren’t paid while on the ground and the aircraft door is open, greeting you while you board, or while saying goodbye as you deplane. This is the most common misconception we’ve come across when explaining our industry to others outside of aviation.

If you’ve ever been a passenger during a lengthy delay and got angry or experienced anxiety over it, you can now sympathize with your flight attendant crew instead.  As each minute passes, their pay is being diluted which means they will be working longer than expected and receiving less monetary compensation for it. Some airlines have implemented pay components that will provide the flight attendant some additional compensation should that flight attendant experience an extended duty day but it’s not much compared to what they would make if the scheduled flights went as planned.

Each airline has in place different pay components called “RIGS” to ensure the flight attendant receives some reasonable compensation during extended delays, long taxi times, diversions, gate holds, cancellations or any other event that causes scheduled flights to not go awry. Some airlines are generous…some not so much.

The main component of a flight attendant’s salary, which we will refer to as “flight pay”, are the total hours the flight attendant is on the plane with passengers either navigating the taxiways or flying in the air.

Typically, flight attendants employed at major airlines in the United States will not receive flight pay until all customers are boarded, the doors have been closed and the pilots have released the aircraft brakes in preparation for pushback from the gate.  Most airlines use the term “block out” for this.  Flight pay will continue until the flight reaches its destination, parks at the gate, and the aircraft parking brake is set.  This is known as “block in”.  The “blocks” in question are referring to the chock blocks the ramp crew puts behind the landing gear wheels to prohibit unanticipated aircraft movement.

Based on data from the Bureau of Labor Statistics, flight attendants log between 75-100 hours a month of flight time. These numbers can vary at each airline depending on the airline’s work rules such as any cap on hours and if overtime is offered or available.

Depending on your seniority within your airline, flight attendants are either on “reserve” or are “lineholders”.  Lineholders are guaranteed a minimum amount of flight hours in predetermined trips per month and those trips are awarded through a seniority-based monthly bidding process.  The different ways that airlines facilitate this bidding process can differ, however all of them rely on seniority to determine what flight attendants can “hold”.  Reserves are also guaranteed a set amount of hours each month, regardless if they fly or not.  Reserve schedules are awarded during the monthly seniority-based bidding process as well.  Being on reserve requires the flight attendant to be available should the company need them to work a flight or sit standby at the airport where they might be needed to fill a position on a crew as quickly as possible.

Here is a comparison of the hourly rates flight attendant receive for flight pay at each airline.

Per diem for multi-day trips in which the flight attendant is required to layover for one or more nights is not taxed. Some flight attendants will specifically bid for longer trips so that they receive more per diem pay.  Packing your own food and spending less on layovers are two ways that you can maximize your per diem allowance and keep more of that money in your pocket.  It’s not uncommon for flight attendants to want to sightsee, enjoy local nightlife, or shop while on a layover- which means they could end up spending more than they earn from per diem.  If one can afford that, no harm no foul because enjoying a layover is a part of the flight attendant experience!

Besides flight pay and per diem, flight attendants may receive additional compensation if they work a specific position on the plane, such as the “Lead Flight Attendant” or if they are language qualified on flights that require an interpreter. Depending on the airline, position pay ranges from an additional $2 to $3 per flight hour and language pay is an additional $2-$3 per flight hour. These pay components are only paid when the flight attendant is receiving flight pay- not for every hour away from base like per diem.

As you can see, flight attendant pay isn’t as clear as a blue sky! Some airlines don’t really go into detail regarding the nuance of pay when they hire new flight attendants and for a good reason. The idea of not getting paid for the first hour you’re at work, the time you are on the ground experiencing a delay or in between flights would not be very alluring for potential candidates. Many flight attendants complain about the lack of a true hourly rate for every hour they are at work. It’s important to note that pilots are also paid the same way for their flight time. Pilots might not be as perturbed by this since they receive a much higher rate for flight pay and also have lower limits for how many hours they can fly each day and remain on duty.  It’s important to note that this is the aviation industry standard and is not likely to be changed anytime soon.

Here is a comparison of supplemental pay components flight attendants receive at each airline.

Due to the unprecedented disruption COVID-19 has put on the airline industry, flight attendants may be facing potential involuntary layoffs (furloughs), involuntary base transfers, company requests to take extended leaves of absence, requests to retire early or take a buy-outs, and pay and hours reductions.  It’s unfortunate and will all depend on each airline’s financial health, government stimulus, the ability for management to come to reasonable agreements with each flight attendant union and, most importantly, getting the public flying safely again as soon as possible.  It cannot be overstated how fervently we wish for the health, well-being, and financial stability for all of our flight attendant colleagues.  Stay strong and stay safe!